The Shanghai Daily reported on June 24 that a career in the China Civil Service is the preferred option for university leavers. Should China employers be worried that university students dream of becoming government bureaucrats?  Here's an excerpt from the article by Zhao Wen:

With its perceived image of job security and decent pay, the civil service remains the preferred career option for university-leavers, the Shanghai Statistics Bureau said yesterday.


In a survey conducted last month of 2,173 graduates and postgraduates from 11 Shanghai universities, 34 percent said their first choice was a government position. 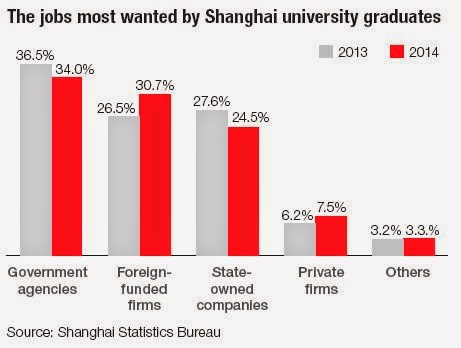 But as graduation day for the city’s students approaches, just 14 percent said they had actually landed such a job.
In broader terms, 55 percent of respondents said they had either found a job, been accepted for a graduate program or had made plans to launch their own business.
Of the people who said they had landed a job, 35 percent said it was with a local private sector firm, 28 percent with a state-owned company and 20 percent with a foreign-invested organization.
On the factors affecting job selection, almost 77 percent of respondents said salary and benefits were their primary concern. Most said they were hoping for a starting salary of 5,300 yuan (US$850), though their actual average pay is likely to be nearer 4,400 yuan, little changed from last year.
The study also claimed that science and engineering graduates are typically the most likely to be offered jobs, due to the high demand for people with technical skills.
You can find the entire article here: http://www.shanghaidaily.com/metro/society/Civil-service-remains-first-choice-for-uni-graduates/shdaily.shtml
Posted by Alexandra Hendrickson at 4:57 AM