Replacing Expats: What Do You Save?

In 2009 we saw Western employers in Asia tighten their belts by “localizing” their management team. By hiring more local executives, Western companies save a lot of the costs of maintaining an expatriate in China.

Western companies that “localize” their workforces do save money but the savings are not necessarily in salaries. Currently salaries and bonuses are not significantly different between Western expats and Asia hires. The major savings are in children’s schooling, housing allowances and tax equalization (the offset of foreign taxation so that working internationally is tax-neutral for the expatriate). Western expatriates in China typically receive reimbursement of $25,000 to $30,000 annually per child for education. Housing allowances can be in the range of $2,500 to $15,000 per month. Tax equalization benefits can be significant in China where tax rates are high.

In contrast, “Asia hires” may receive additional perks such as healthcare insurance that supplements publicly available health benefits. Car allowances, home leave (if the employee is not living in his/her home city) and additional vacation time may also be included. Many Western companies find that even by offering an equivalent salary and these additional benefits to an Asia hire, they still have significant savings over paying a “fully loaded” expat package.

The definition of “local” in China is fuzzy, encompassing often not just Chinese nationals but Mandarin-speakers from Taiwan, Singapore and Hong Kong. Western companies generally seek English and Mandarin speakers with strong technical skills and familiarity with how Western companies operate. Qualified candidates gain this experience when they pursue graduate studies and work in a Western country or when they build successful careers at Western companies in Asia. We are also seeing in the market Mandarin-speaking Westerners with Asia work experience willing to accept local compensation packages.

As the China economy warms up in 2010, the market for top leadership could become as illiquid as it was 3 to 4 years ago. Right now is a good time for Western companies seeking qualified Mandarin-speaking leadership to start looking. 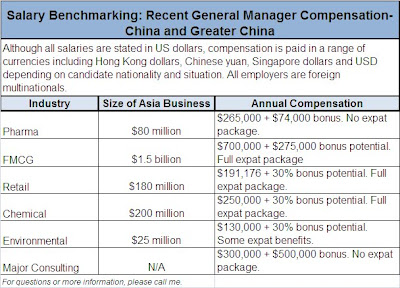 Posted by Alexandra Hendrickson at 11:49 PM