Several weeks ago, a Chinese friend, we’ll call him Mr. Li,  who is the China CFO for an MNC life sciences company called to ask my advice. He said that he had been shaken by the arrests and publicity around the recent GSK (Glaxo Smith Kline) scandal in China. Mr. Li worried that his company might have engaged in some of the same practices that GSK was accused of.  He was afraid that if the scrutiny that is being applied to GSK was applied to his company, it might be found to have similar problems. He wondered if this was a good time to change jobs.

The scandal at GSK is one of several investigations of MNCs we have seen recently in China. GSK was accused of violating Chinese laws by increasing the sales and prices of drugs by bribing hospitals and doctors. Four GSK executives were arrested in August. GSK’s China sales took a big blow.  The scandal comes as a result of an industry-wide China State Food and Drug Administration investigation into the sales, marketing and distribution tactics of foreign and domestic players in China’s life sciences industry.  China’s health care system relies heavily on selling through distribution networks that may obscure back-door payments to doctors and hospitals.


Tougher going for MNCs? China watchers view the scandal as a sign that multinationals may have a harder time in China going forward.   The seven major strategic industries in China’s 12th Five Year Plan (including life sciences) explicitly support Chinese companies.  Western MNC’s may come under increasing examination from the Chinese government, giving Chinese companies a competitive advantage. There is also a perception that Western companies have been unrealistic about the growth opportunities in China and have set expectations that have caused employees to do whatever it takes to meet goals.
Observers agree that the crisis spotlights the continuing need for strong leadership in China. Navigating business issues here requires strategic thinking, an understanding of China business practices, the ability to identify pitfalls and make recommendations to the corporate home office about how to avoid them. At the same time, as the China environment becomes tougher, MNC management needs to be receptive and listen to its managers on the ground. 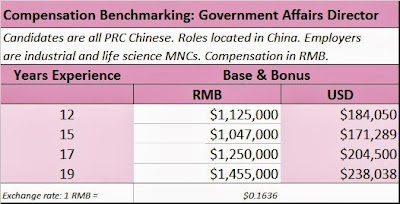 Posted by Alexandra Hendrickson at 10:56 PM